Rambling Along with Recipes.. 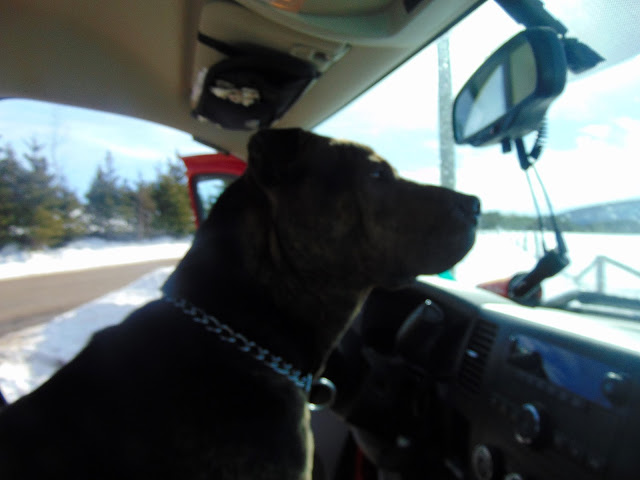 Hello everyone..
Another little Saturday Ramble Along for you..

You all know Charlie by now I think..
Terry and I took a drive up to the farm to get some spring water and of course, Charlie came along for the drive..
He is such a good dog..
He just sat there waiting for us to tell him he could get out..
The whole time he is just staring out the window wanting to get out and run to the house..
But Terry was getting on his snowshoes.. 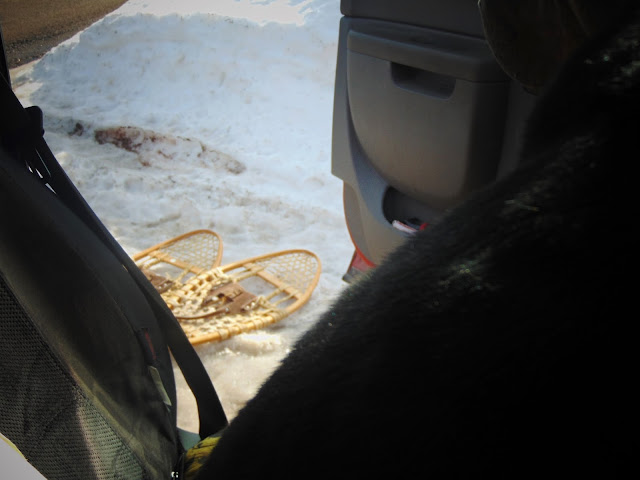 This takes a little longer then it used to ..
Don't tell him I told you that.. grin..
Anyway, I took pity on Charles and told him to get out and away he went.. 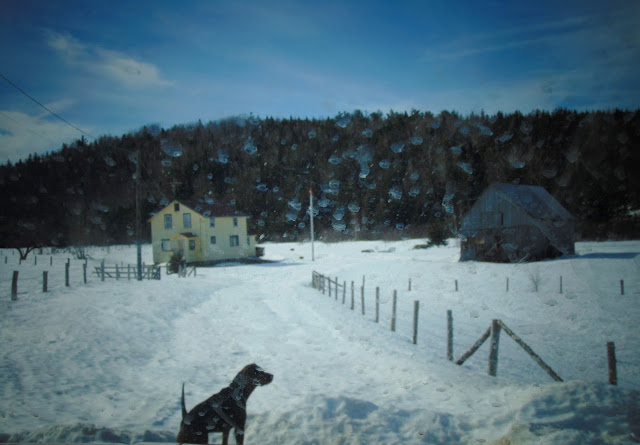 Which way should we go?  lol
Do note the windshield needed a wash..

Away they go..
Terry takes a sled so he can bring back about 8 bottles of water..
They are each 4 litre bottles..
The sled lets him bring back more..
I can't snowshoe so I am stuck in the truck..
Not that I mind as I read..
Of course..

When we came home I made this Impossible Pie..
I did a post about this a long time ago..
You can find the recipe HERE.. 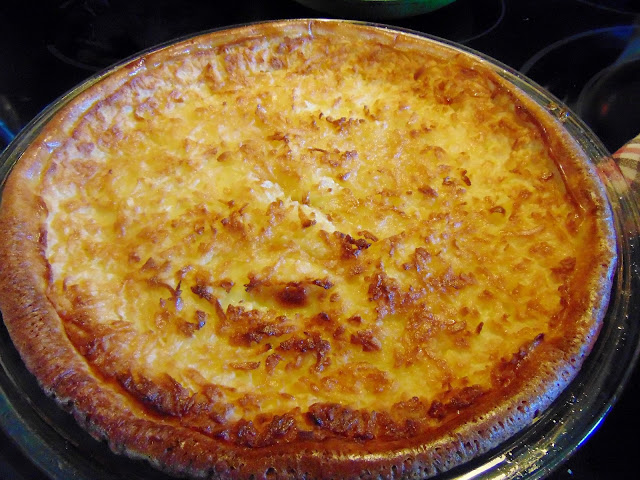 Please note that I only added 3/4 cup of sugar this time and it was plenty for us..
Also, you can add 1 tsp. of baking powder with regular flour..
Some recipes just call for flour..
Also, I add 1/2 tsp. coconut flavouring and a pinch of nutmeg..
K?

Rambling along here..
I saw this wreath in one of my UK Country Living magazines.. 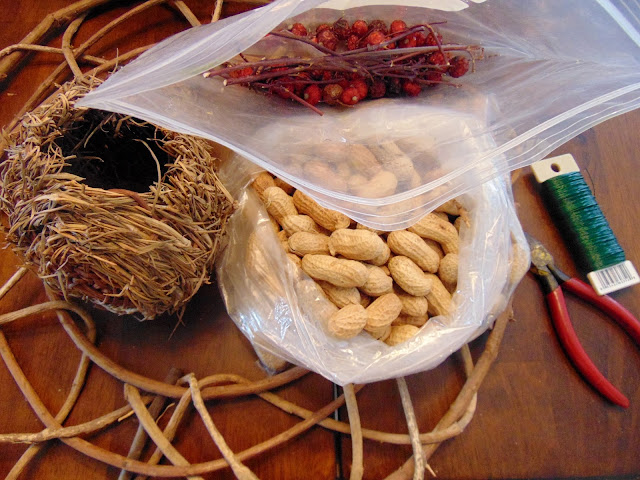 I decided to give it a try..
It said to put wreath wire through the peanuts..
Well, the wire I had just kept bending so I just wrapped each peanut and tightened it... 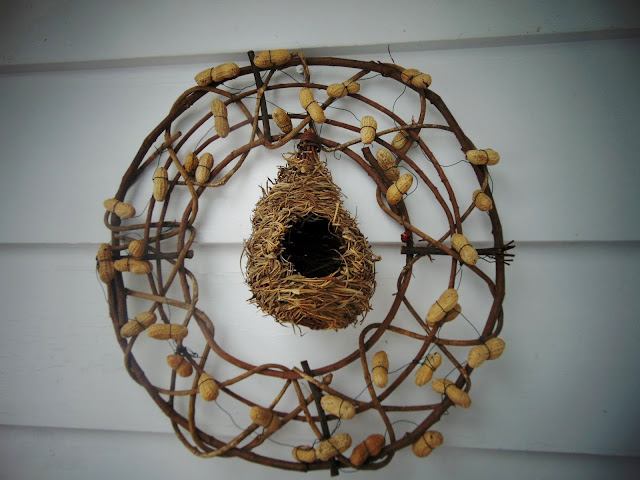 Not as pretty as theirs but the birds didn't see the magazine pic.. smile..
My rose hips were dried and also too hard.. sigh..
Nor did I have any cranberries as I used them all for making juice..
Oh well..
I tried..

Had a craving for WonTon Soup so made a bunch of wontons.. 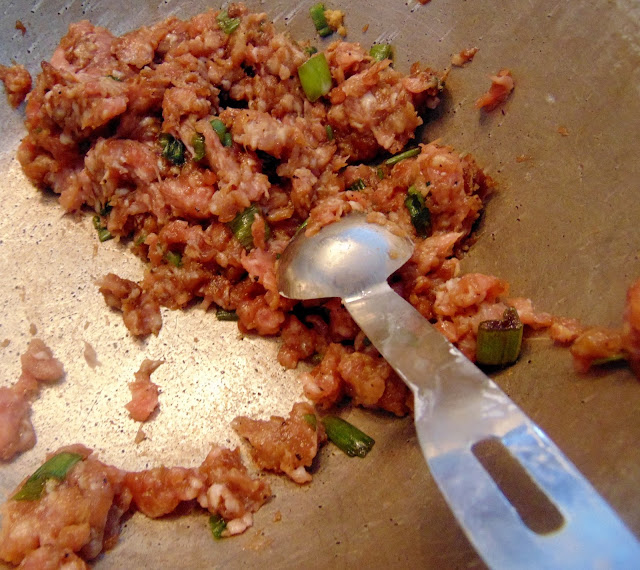 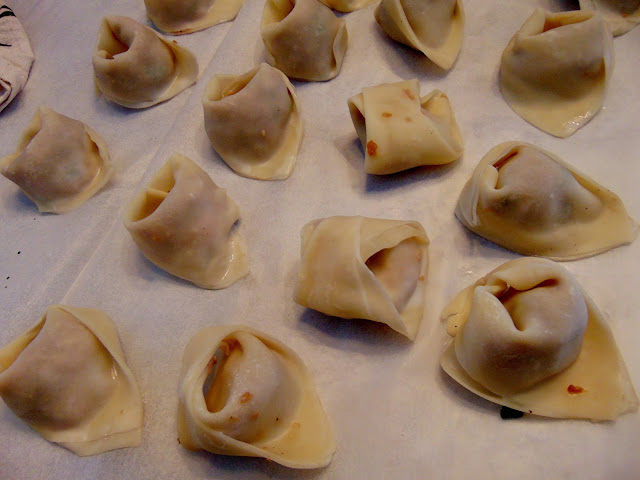 They are delicious, though..
I used shrimp in half and ground pork in the other half..
There are all kinds of recipes on line..
This one is good..
Here

Rambling along a bit more..
I was so excited this week to find an add in Kijiji for a Propane Kitchen Stove in good condition for sale..
The price was right so we called the guy and arranged to go and see it.. 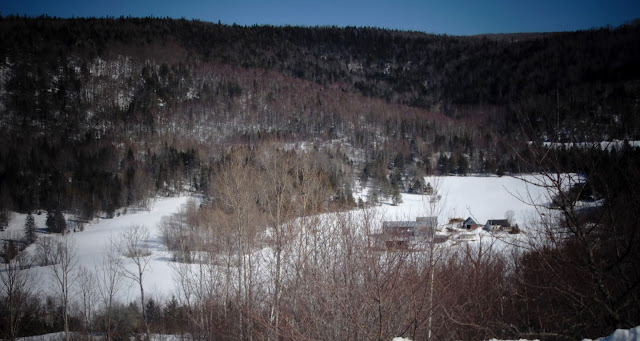 He told us to call him and he would meet us at the end of his lane..
When we got to the top in his jeep I was glad he brought us up.. 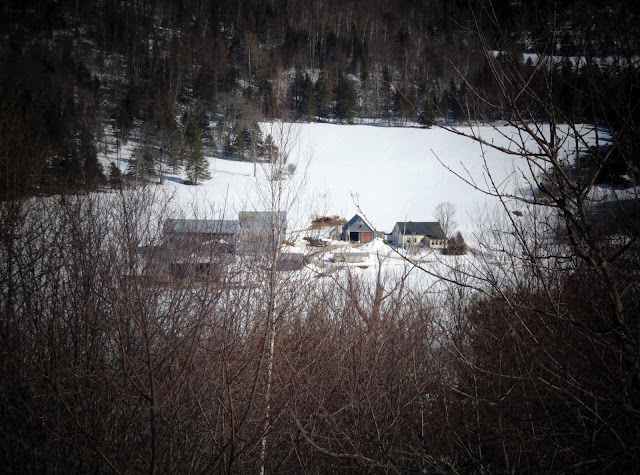 It was a long way up that mountain but the view was spectacular as you can see.. 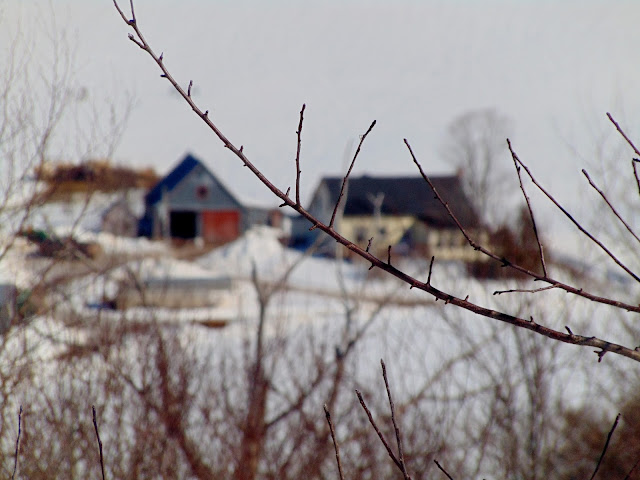 This is the Hawkes Farm way down there in the valley..
We had such a great time chatting with him and we found we knew so many of the same people..
The stove was perfect so now I can't wait to get it in the old farm kitchen and make some bread.. smile..

When Terry and I had our first little home..
It had a beautiful yellow propane stove with a grill between the burners ..
I so loved that stove and have always wanted another propane one..
So thankful to finally (47 years later) have a chance to use one again..
I love kitchen ranges and so wish that we could afford an Aga..
Here in Canada they are sooooo expensive but I am very happy with this one..
We were happy we could leave it with them until our driveway is cleared in a few weeks..

Another reason to look forward to summer at the farm.
I think..
We still have not made up our minds whether to go there or to the cottage..
I told Terry he has until this weekend to make up his mind.
He is never in a rush to make a decision.. sigh..
I am just the opposite, of course.. grin..

Made this cake also.. 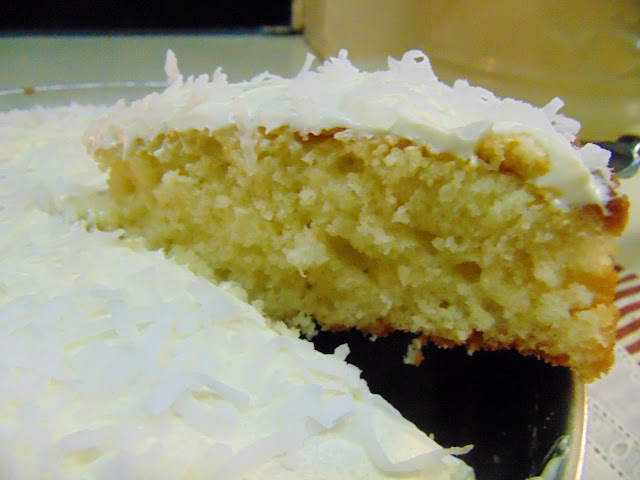 So simple but delicious..
For those times you just want a piece of white cake and a cup of tea..
Here is the recipe..
White Cake..
1/2 cup of butter
1 cup of sugar
2 eggs..
1 tsp. vanilla
Mix well..
Sift together and add 1 1/2 cups of flour,  2 tsp. baking powder and 1/2 tsp. salt..
1/2 cup of milk
Beat all up together and pour into a greased 9 inch round or square cake tin..
Bake for 25 minutes or until golden brown and toothpick comes out clean.
I like using a round tin and cutting it like a pie..

Ice with a vanilla frosting and a bit of sprinkled coconut if desired.. 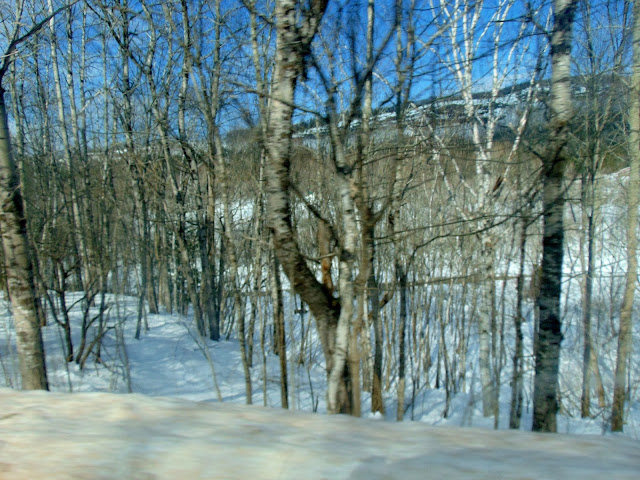 We have had rain for the last couple of days so our snow is disappearing..

I am almost done my ramble and roll, I promise.. smile.

Terry bought a couple of heads of cabbage ..
We were wanting some sauerkraut ... 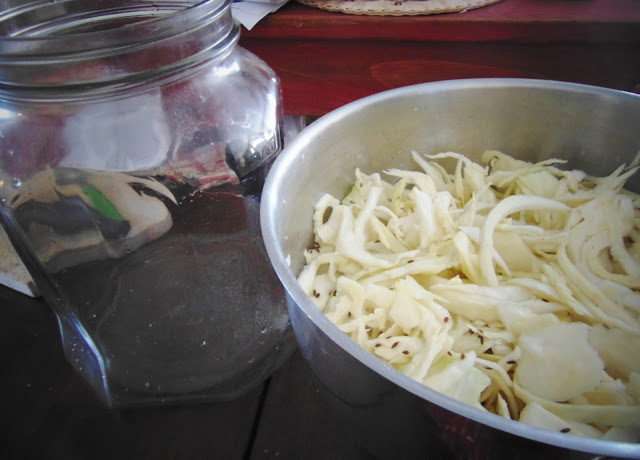 Shredded up about 5 pounds of cabbage and 1 T. dill seed..
Tossed it with 3 T. coarse salt ..
I had about 1/2 cup of whey from some cheese in the fridge and added that..
Let it sit for half an hour and then started pounding.. 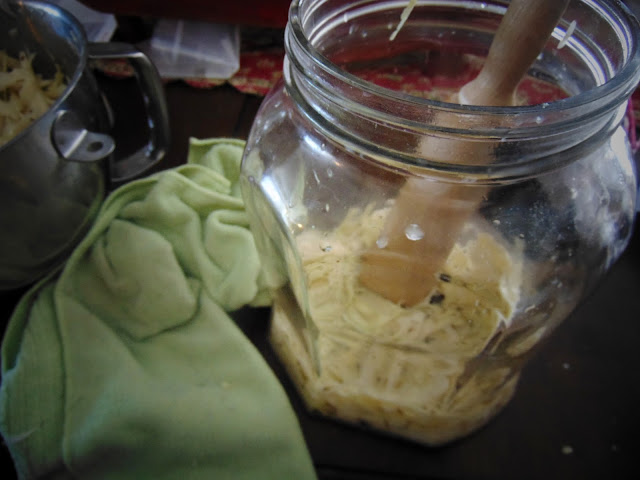 Covered with a big cabbage leaf and a jar of water to keep it weighted down..
Tied some cheesecloth on the top and
set it on the counter for 3 days then store in the fridge..
So good for you as well as tasting good..

We passed the ski hill on the way home from buying our stove.. 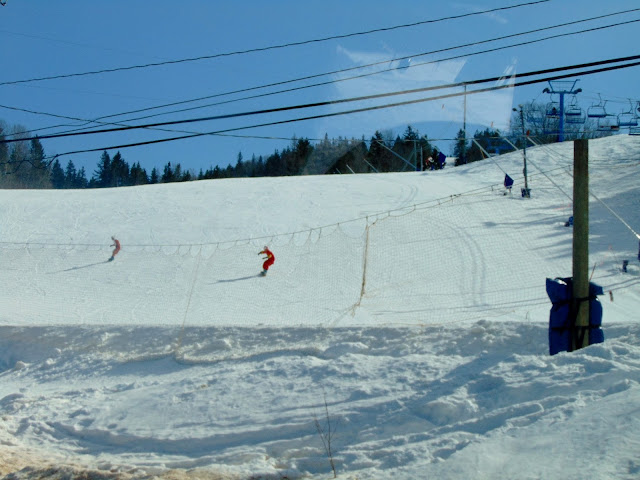 It was a lovely day for it.. 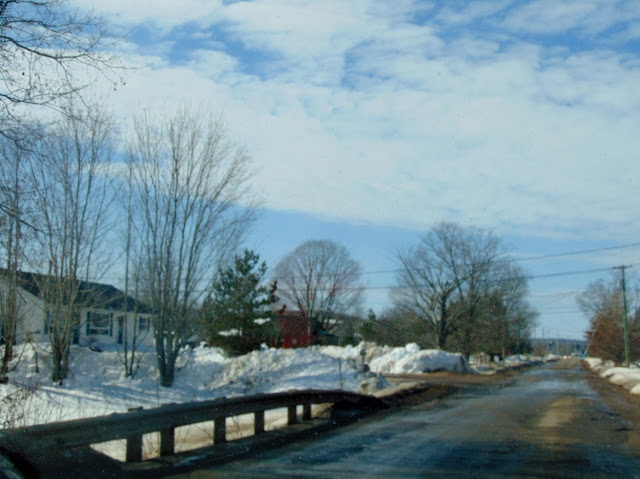 Terry stopped at the grocers and bought a few beef roasts that were on special.. 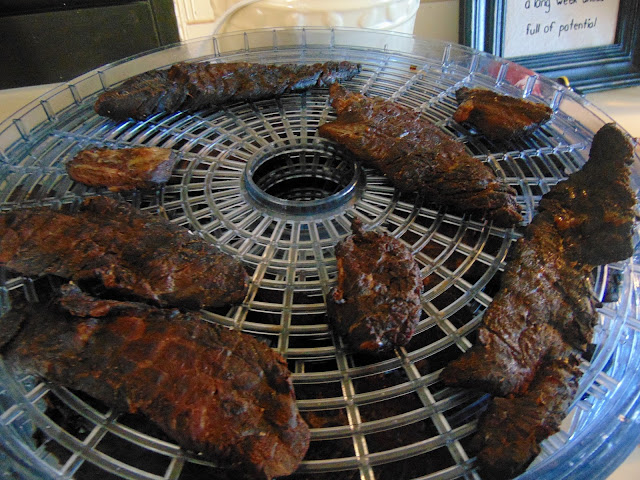 We had our first attempt at beef jerky..
He decided we should cut it thinner..
But the flavour is there and he has another batch on drying now that are look better..

Anyway, dear hearts I think I have rambled on a bit too long.
We do other things then cooking although it doesn't look that way on this post, eh?  smile..

Thanks for visiting and as always I look forward to hearing from you again..
Have a blessed Sunday tomorrow!

He is a great God! 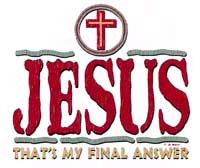 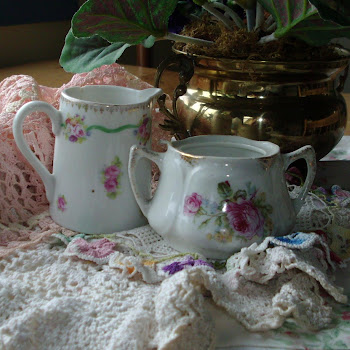